“No thirteen year old should have to spend months on end as a day patient because they’ve been taught their sexuality will kill them.” 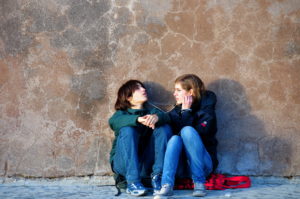 My parents took me out of Emmanuel College after three years; that was as long as they could take, seeing me deteriorating to the point where I would scream through the night, hear voices, self-harm, contemplate suicide. All before the age of fourteen. At any other school they would have alerted my parents about these behavioural changes, recommend to them to get help for me or offer it themselves through pastoral care. Not Emmanuel College.

At age 11 I had begun to question my sexuality, and given the nature of their beliefs I knew to keep my mouth shut and my head down, and quietly hate myself for being—as they put it—a mistake, something which needed fixing. Teachers would never challenge the homophobic slurs thrown my way, but rather they would look at me and nod in approval, more or less telling me I deserved what was said – or done in the instances where the bullying became physical. An instance of this that stands out was a girl kicking and pushing me down in a French lesson after screaming that her folder hand “lesbian germs” from me walking too close to her. There was no reprimand, no asking if I was okay, I was told to just sit down and stop causing a fuss. Sadly I received no medical attention either, and by the end of the day I couldn’t walk; when my Dad picked me up from school he had to take me straight to the hospital. It turned out that the girl had kicked me so hard, combined with how I’d fallen, that I’d torn the ligaments in my ankle.

“Apparently sex outside of marriage is the sole cause of STDs, and their is no cure whatsoever for them. It’s a punishment for your sins.”

The tipping point seemed to be when they taught sex education in Year 9. It had already gotten out that I was queer, mostly through malicious rumours and gossip. The school would bring in an outside group called Lovewise to teach Sex Ed. As Emmanuel was one of the first Academies they were allowed to let Lovewise teach us, though I’m not sure I would call it teaching. The opening statement was about how sex is like fire, ‘in the right environment [meaning marriage between a man and a woman] it can be warming and good, but in the wrong settings it will burn you and cause destruction’. Their idea of informing us about contraception was that marriage and abstinence are the only tried and tested methods. I wanted to point out at the time that it didn’t exactly work out like that for the Virgin Mary… but given how beaten down I felt I didn’t want to draw any attention to myself. According to Lovewise, other contraceptives are designed to fail as they do not protect your soul. Apparently sex outside of marriage is the sole cause of STDs, and their is no cure whatsoever for them. It’s a punishment for your sins.

They really hammered this one home with their teachings on LGBT relationships, the only mention that the topic received. “This man is a homosexual,” the speaker announced, his slide showing a picture of an emaciated man in a wheelchair. ‘He is dying of AIDs, a disease which attacks your immune system and destroys your body and soul. This is what happens when we stray from the path God has chosen for us, when we lust after those of our own sex rather than the opposite – as God intended for us. AIDs is a punishment for being an abomination in the eyes of our Lord.’ Again, looking back I would scream at him, demanding to know why there are children dying from this disease and what they could have possibly done to piss off the guy upstairs. But at the time I was terrified.

While there was no mention of relationships between women, I was still scared, more so of the new round of ammunition my bullies would have. And I was right. Soon others in my class would scream if I was seated next to them, saying they would catch AIDs if I so much as looked at them. It was never challenged, dismissed as them being silly. Eventually the only workaround that teachers could find was to have me do my work in isolation in the pastoral office. It’s usually reserved for punishment, which is probably why they chose it for me rather than for those making my life hell.

It was at this time they told me that they knew of somewhere they could send me over the summer, a camp so to speak. They had experience working with ‘troubled’ young people and this place would fix me. I shudder to think about it now. I never told my parents until years later, after finally coming out to them. At the time I was so ashamed of myself—purely for existing as I was—that I didn’t dare tell them I was bisexual. They had me convinced that it would break my mother’s heart. It was thankfully around that time that they couldn’t take anymore of the screaming and tears, they withdrew me from the school, despite threats made by them to report my parents for mistreating me if they didn’t let the school ‘do their job’ and get help for me through them. After a few choice words and threats of legal action from my Dad they let me go.

I ended up missing out on the summer holidays and what would have been my first term at a new school that year because of the level of contact I needed with mental health services. No thirteen year old should have to spend months on end as a day patient because they’ve been taught their sexuality will kill them.

It’s been ten years now and I’m still having to see a Community Psychiatric Nurse on a regular basis. I take six tablets a day and heavy sedatives to help me sleep through the night. I’m in a loving relationship with a wonderful human being, my parents and friends still love me despite everything I was taught would happen to me. But I’m sad to say they stole my ability to love myself at a young and crucial age. At this point though I believe the best way I can get back at them is to regain that ability, and expose the danger they pose to young queer folk.

This piece has also appeared on patheos.com at http://www.patheos.com/blogs/leavingfundamentalism/2017/07/22/coming-queer-emmanuel-college-gateshead/.

Read another FSA blog post from a former pupil at Emmanuel College, Gateshead – ‘Creationist teaching was commonplace at my state school’: https://faithschoolersanonymous.uk/2016/05/creationist-teaching-was-commonplace-at-my-state-school/.