The law currently dictates that all community, voluntary and foundation secondary schools in England must provide sex and relationships education (SRE). However, the minimum requirements for this SRE involve teaching only about sexually transmitted infections, including HIV/AIDS, in addition to the sex education elements of the National Curriculum (i.e. anatomy, puberty, and reproduction). These schools are also obliged to produce and publish an SRE policy, detailing any SRE provided beyond these statutory requirements.

Academies and Free Schools, on the other hand, are not required to teach SRE at all.

In English primary schools, SRE is not compulsory, though government guidance produced in 2000 states that pupils should know about puberty before it happens, and recommends that menstruation, contraception, abortion, safe sex and HIV/AIDS should be covered. If primary schools wish to provide SRE, they must set out details of the programme. If they do not wish to teach any SRE, they are required to explain its absence.

SRE is generally seen as part of a broader subject in English schools called Personal, Social, Health and Economic (PSHE) Education. But beyond the requirements related to SRE, outlined above, PSHE is not legally required to be taught. 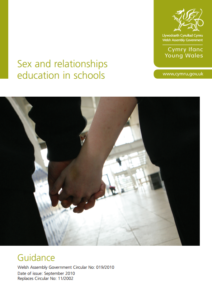 In Wales, SRE is a compulsory part of the basic curriculum in all secondary schools, though as in England the minimum requirements only involve the sex education elements of the science National Curriculum, and teaching about sexually transmitted infections and HIV/AIDS.

While primary schools in Wales must teach the sex education elements contained within the national curriculum for science, there is no requirement for them to provide SRE beyond that. However, the Welsh Government recommends that ‘all primary schools have a graduated, age-appropriate SRE programme’ and all schools are required to have a policy on SRE, either outlining the details of their SRE provision or explaining why they have chosen not to provide any.

Unlike in England, in Wales personal and social education (PSE) is a separate statutory part of the basic curriculum – although it retains some crossover in content. It is to be provided in both primary schools and secondary schools for all pupils aged 7 to 16. Provision is expected, though not required, to be based on the Welsh Assembly Government’s guidance from 2008, which states that:

‘Sex and relationships education is required to be placed within a clear framework of values and an awareness of the law on sexual behaviour. Features such as family life in all its different forms, including marriage, sexual behaviours, parenthood, and sensitive issues such as abortion need to be presented in a balanced way and ethical issues discussed objectively’.

The PSE guidance does not include any sex education before Key Stage 3.

Parents are entitled to withdraw their children, either wholly or partly, from all SRE not contained in the National Curriculum. Pupils have no right to withdraw themselves.

In private schools there is no requirement to teach any SRE at all.