“It did not take long for me to realise that this group of people were very different from those of mainstream religions, and to witness the damaging impact they have on young people.” 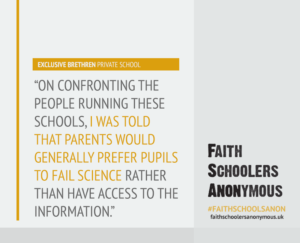 My time working for the Exclusive Brethren (EB) ended in complete disaster, although it had not always been that way.

The Brethren school I worked for was a secondary school of around 32 pupils.  When I applied for the position as a Science teacher I had never heard of the EB before, but I am not biased as a person, and believe people should live how they wish even though it may be different to myself. As a humanist – I have many friends who do have faith of various sorts.  However, it did not take long for me to realise that this group of people were very different from those of mainstream religions, and to witness the damaging impact they have on young people.

Not everything about the school was negative – the fact that pupils did not have televisions, radios, computers, internet, newspapers, and many books meant that they seemed generally more sociable with each other than pupils I had taught at mainstream schools.  They were more alert and less likely to become distracted during class, and had good social skills (amongst themselves).  They were also generally very polite, almost too polite, thanking teachers after the end of each lesson, and respectful of everyone involved in the school – on the surface anyway.  There were many gifted and talented pupils for whom I felt most sorry for, since their future was to be tied up within Brethren businesses, whether they liked it or not. University education is strictly discouraged.

In my contract, I was issued with a set of rules for the classroom, including disallowing conversations regarding further and higher education.  All media that was used (clips saved on discs) had to go through the screening process first, and edited if necessary to remove anything which may go against their way of life / the bible.

Most importantly, for me, was the fact that evolution was never to be discussed (I taught all three sciences, and Evolution happened to be an entire unit, so this presented many difficulties!).  I soon learned that even the textbooks in the classrooms had had large amounts of material removed; for Biology there was nothing on reproduction and hormones, evolution, adaptation, infertility. For Chemistry there was nothing on radiocarbon dating techniques (I was told to teach that these were all flawed if asked), or the age of different types of rocks. For Physics there was nothing on the Big Bang / beginnings of the universe, red shift, doppler effect, etc etc…..the list when on and on. 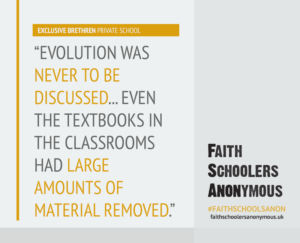 There was so much removed from the course, that I had to secretly provide pupils with information in order to pass exams – and pupils were generally accepting of this, as they too wanted to pass, and agreed not to tell their parents (a huge burden).  On confronting the people running these schools, I was told that parents would generally prefer pupils to fail science rather than have access to the information.  This obviously was hugely difficult, as at the same time “Focus Education Trust” were constantly aiming to increase the achievement of pupils in examinations.

Computer use was also highly restricted (they are called Wordex machines in Brethren schools), so much so that, in order for pupils to do the research required for science coursework, I had to print things at home, and give them out to pupils to select what they would use, all without the Trustees of the school or parents finding out.

The attitude of pupils was what I found most shocking after some time.  It became obvious that they (due to their confined living arrangements) were outwardly extremely racist, and homophobic, and due to the fact that they considered animals (other than humans – although to a Brethren pupil a human is not a member of the Animal Kingdom) had no souls, they abused them on a regular basis.  Brethren do not keep pets, but were very willing to share their experiences of torturing various different animals from birds to rodents, to chickens and cats, to the degree that I decided to invite the Scottish animal welfare charity SPCA into school to give a talk on the penalties involved in animal cruelty.  I introduced a gerbilarium into the science lab, which helped some students to eventually realise that other species were not useless, as they enjoyed handling these animals at any given opportunity, and were left puzzled at why they felt they bonded so much with beings that were soul-less. It was a very confusing experience for them, but one which I hoped would help to teach them respect for other species at least.  I also learned from discussions with them about animals or people different to themselves, that they had very little knowledge of the terms “ethics and morals”, and were even suspicious of them!  I found this astounding especially from 17 / 18yr old pupils.

I also took pupils on field trips.  These were always an experience to plan for, as being in a river, or climbing a hill, or working in rock pools are not easy when wearing a long skirt!! All girls were forbidden from wearing trousers, even out in the field, as were staff. It’s a very strange feeling standing in a river wearing a skirt and wellies (!).  It was obvious from their behaviour in the field that they had a very controlled life outside of school, so I organised as many trips as I could.

Another aspect of taking pupils outside of school on trips (or even into the playground for that matter) was that they must not eat with those outside of the Brethren – therefore I often found myself having to abandon my pupils on the top of a mountain, or on the beach, simply so that they could eat.  If for any reason I could not leave them alone due to health and safety, they refused to eat. Eating with outsiders is considered sinful, and brings disciplinary action, which pupils were obviously terrified of (if they eat in the presence of non-Brethren they will be considered unclean – a lot of the “rules” were originally taken from the Old Testament, although then changed to suit the Sect itself).

I often felt sorry for pupils leaving school, as they seemed to love it so much (an escape from their normal lives, where church is an everyday activity).  Outside of school, students would be up for church at 6am every morning, then on most weekdays there would be services after school, and the whole of Sunday consisted of multiple services, which meant pupils were exhausted coming back to school on Mondays, and usually had failed to complete any homework.  It was very obvious that schooling was very low on the priorities for the Brethren.  It was also quite clear that many of the older pupils (14 upwards) had been indulging in alcohol over the weekend; which the Brethren are well known for – with babies as young as 18 months old now having their first communion, with wine, and from then on every morning, very young children were being accustomed to the consumption of alcohol.

On leaving school, girls are generally expected to marry by the age of 21, and until then help out in businesses, but never holding a position higher than a man.  In church too women are to sit behind the men, and never to speak.  After marriage the girls are not to work at all.  Many have large families seemingly to compensate for this.  Those with learning difficulties are often the worst off, as they usually will never marry, and are treated as second class citizens and often mocked for their disabilities. 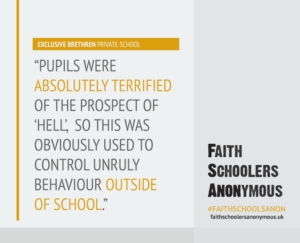 Any pupils who were intrigued into life outside of the Brethren (they would ask endless questions in class, and teachers were “supposed” to not allow such conversations) were clearly frustrated about where exactly they fitted in / didn’t fit in, but due to the extreme level of control by the church, there was so much fear, that even those tempted, would find it too much.  On leaving they would lose everything.  All contact with family and friends, and be thrown into a world which they had been taught since birth was evil, and full of evil people, and that they would go to hell.

Pupils were absolutely terrified of the prospect of “hell”, so this was obviously used to control unruly behaviour outside of school.  The level of control has increased so much (as opposed to some other faiths where it has lessened) over the years, that there are now very few willing to attempt to leave, due to so much fear, whereas in the past quite a few families left the church.  As each new leader came into power, more and more control was exerted on the Brethren (the flock as they are known), until they can no longer even think for themselves (and if they do – this is condemned; again making teaching very difficult).

There is so much more information I can provide on working with this group of people, and their schooling, so I will try to provide more, and also about my personal experience with them that resulted in me leaving in the end.