“I found my daughter praying in her room one day, to which I asked what she was doing. Her reply (she’s five) was that her teacher told her she needs to pray to God to be smart….. This is supposed to be a secular school.”

State schools with no religious character 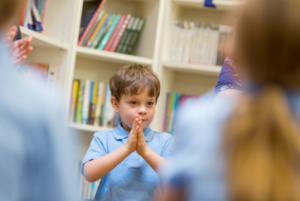 Current law requires all state-funded schools in both England and Wales to hold daily acts of ‘Collective Worship’, and in schools with no formal religious character this worship must be ‘wholly or mainly of a broadly Christian character’.

However, this does not mean that all assemblies must be Christian in nature. The government guidance, both in England and in Wales, states:

Many schools therefore choose to meet their obligations by ensuring that 51% of their assemblies are Christian, while the other 49% are more inclusive.

In addition, sixth form pupils and parents on behalf of younger pupils have the right to withdraw from Collective Worship, either in its entirety or from parts of it. A child can be removed for only the worship element of an assembly and then reintroduced for the remainder of the time. This can present practical problems and without a degree of cooperation from the school, opting-out can mean children are excluded from an important part of the school day.

Schools are not obliged to arrange any alternative activity, so in many cases children end up being sent to an empty classroom or told to sit outside in the corridor. This particular problem is, to a degree, addressed by the guidance as it allows for children who have been opted-out to remain physically present during collective worship, but not take part. However, this will not be acceptable to many parents and a school must agree to this arrangement so it is therefore again dependent on their cooperation.

Beyond pupils being opted-out, schools with no religious character can apply for a ‘determination’ to change the character of their worship from Christian to something more suitable given the make-up of the school. However, alternative worship must still be provided and, according to the guidance, must involve ‘reverence or veneration paid to a divine being or power’. This means that whilst the character of that worship can be changed to ‘spiritual’ or even ‘multi-faith’, some element of worship must remain. All applications for such determinations must be directed for decision to the Government if the school is an Academy, or the local Standing Advisory Council for Religious Education (SACRE) if the school is not.

Schools with a religious character

Collective worship in schools with a religious character is not subject to SACRE or Local Authority control, but rather is set by the governing body and conducted in line with the religion and trust deeds of the school. However, sixth form pupils and parents of younger pupils still have the right to withdraw.

Private schools are allowed to do what they like with regard to worship: they can choose to have it, or not, and if they have it they do not have to provide a right of withdrawal for parents or pupils (on the basis that the parent can withdraw their child from the school entirely – even though this leaves the pupil with no apparent equivalent rights to those they would enjoy in the state sector). In practice we believe that most private schools have daily collective worship.