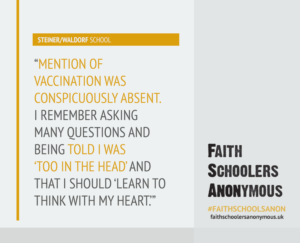 The fetishizing of nature and the promise of an unhurried childhood can be very appealing to the educationally anxious parent looking to be green and good. I had previously read about Steiner Waldorf schools in a glowing article in a national newspaper. It described an holistic creative education based outdoors using “nature as teacher.” Intrigued, I began by taking my son to a Steiner parent and toddler group. So enchanted was I at the time, I managed to persuade my family to move 40 miles away to be near a bigger Steiner school where our son would be able to attend long-term. I remember attending the summer fair and whilst I stood in the queue to request a prospectus, a woman in front of me asked the administrator the following question: “How will the school meet the needs of my psychic daughter?” He smiled and replied “We are all psychic here.” I thought he was joking.

Once we had moved and enrolled our son, the teacher started to mention the word “Anthroposophy” and the existence of a study group for new parents. I felt foolish that I had to ask what Anthroposophy was (I had previously looked for the word in my dictionary and had not found it) and was told it was the study of human wisdom. The teacher didn’t tell me a core belief of Anthroposophy as originally conceived is the concept of reincarnation of the soul through racial hierarchies from Black to Aryan as a consequence of a person’s karma; or the classification of a child’s soul according to their physiognomy, nor was I told of the Anthroposophical movement’s history. I didn’t question further at that stage. As one parent recently observed “You don’t expect a school to lie.”

Many alarm bells rang during our time there. I remember the intense gaze of the teachers that would continue far longer than was comfortable. There was little laughter, everything was carried out in a very slow and purposeful way with a sing-song voice, the lighting of candles, the wearing of strange hats, their infatuation with wool — I recall a felting session where the teacher spoke of the special energy of the wool, declaring it had come from a biodynamic sheep. I recall the time the teacher took both my hands in hers and explaining my son had “chosen me as his mother,” on a further occasion she stated he had “chosen the school” and that children “get what they need” – ostensibly an innocent cliché until one understands its particular meaning within Anthroposophy. I also recall politely refusing a teacher’s offer, made during a parent and toddler group session, to lend me a copy of The Indigo Children and compile an astrological chart based on my son’s birth date. Another time, when a boy enacted a scene from a Spider-Man cartoon, the teacher asked his mother why he was behaving in this way. The mother explained that her son had been playing with children who lived on the same street — children who watched television and went to the cinema — the teacher replied, “It’s best to play with children from the school community.”

I noticed that some of the Steiner school parents became progressively withdrawn from family and friends outside the Steiner movement and gradually surrounded themselves only with those who followed the Anthroposophical belief system. I remember being invited to various other self-development programmes including Landmark Education/Forum, Non-Violent Communication (also known as Compassionate Communication), the Amma movement, and Family Constellation workshops — programmes the school appeared to endorse with many of the Steiner teachers participating in them. I remember the school reception displaying numerous leaflets promoting homeopathy. Mention of vaccination was conspicuously absent. I remember asking many questions and being told I was “too in the head” and that I should “learn to think with my heart.” I recall parents asking the teacher’s advice regarding well-meaning grandparents buying electronic and plastic toys, both of which are frowned upon in Steiner schools. The teacher directed them to a specialist Steiner Waldorf toy catalogue. I began to think this was more about control than care.

I remember looking around the school one Saturday and seeing a group of children performing a strange dance in long robes (eurythmy) which brought to mind certain unsought images from my degree-level studies involving mid-20th century European history. When the teacher noticed we were watching, she stopped the children and stared at us indicating we were not supposed to be witnessing the children’s performance even though it was outside. I remember feeling quite unnerved at the time.

During one of the sessions we attended at the school, my son was violently pushed backwards off a play bridge. I understand this is not unusual, as it could happen in any nursery or school. However, as I sat there comforting my child, I noticed that the teacher who witnessed the incident didn’t respond in any way or acknowledge what happened. Instead, she continued to sew in silence. I sat there in utter disbelief. The act of ignoring felt more violent than the original act itself. Seeing that I was somewhat baffled and distressed by the teacher’s lack of concern, a parent later explained to me that the children were “working out their karma.” I remember questioning her as I couldn’t comprehend what she had just said. She explained that her sister was a Steiner Waldorf teacher in Germany and repeated that it was their karma — it was one child’s karma to push, and my child’s karma to be pushed. I later telephoned the school stating we didn’t think the education was suitable for our son.

An extended version of this piece was first published on the Waldorf Watch website under the name ‘Coming undone: unravelling the truth about the Steiner school movement’.