“Sadly, to those of us who have been through the illegal Charedi education system, none of this is at all surprising” 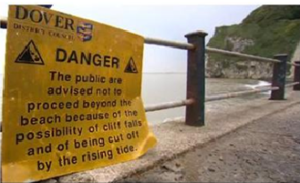 ‘When they were plucked to safety, the schoolchildren were still in high spirits apparently unaware of the danger they’ve been in’ noted the ITV reporter who sounded rather perplexed.

This story which has been widely reported over the last few weeks, understandably caused some bafflement among reporters. How did a class of 34 school-children from London along with their two teachers walk past ‘nine warning signs’ on their way to the bottom of the cliff? None of whom ‘were dressed in any attire that you would associate with clambering over rocks’.

Sadly, to those of us who have been through the illegal Charedi education system, none of this is at all surprising.

The lack of basic teaching in English meant that neither the students nor the teachers (born and brought up in the UK by the way) had any of the grasp of what the words on the warning signs meant. Moreover, the notion of rising tides would be an alien concept to these boys because the teaching on science or geography is considered ‘evil’ for the role it plays in causing these pupils to question the sanctity of ancient religious scriptures.

So where are the authorities in all this?

The initial response by a PR firm hired by the school, was that they were a trip organised by an unknown community centre, which has no registered records anywhere and seems to have popped into existence only after this tragic incident.

A subsequent investigation by The Independent and British Humanist Association (BHA) found that these pupils and their teachers were in fact from an illegal unregistered school and had simply lied about the community centre. The full report can be found here:

Particularly shocking is the finding that ‘the teachers put the children’s lives in further danger because, once they realised they were at risk of drowning, they initially contacted community leaders in Stamford Hill, north London, instead of contacting authorities for fear of the illegal school being discovered.’

This illegal school has been known to the authorities for many years and yet no concrete action had yet been taken to shut it down.

The most disturbing outcome of this incident is highlighted in the final paragraph of the report:

‘A spokesperson for Hackney Council told The Independent they do not have any legal powers to close the schools and are conducting an investigation into the incident. They stated that they believed the children were from a school rather than the community centre but said that the school is not an illegal secondary school but a nearby legally run private primary school. After it was highlighted that this was not possible as the children in the incident were not of primary school age and sources outside the school site had confirmed it was the illegal school involved, Hackney Council declined to comment further.’

The primary school in question is a registered religious school about half a mile away from the location from the illegal secondary school who took these boys on the treacherous trip.

It is astonishing that Hackney thought it realistic to make such a claim. According to the latest 2016 Department for Education census, the primary school which Hackney tried to claim these boys belonged to has no pupil above the age of 11 and isn’t registered to take anyone older than 11 anyway.

If these 34 pupils were indeed from the above school, they would have all been aged 10 or 11. Yet all the boys on this trip (as seen in the reported images) were clearly older and were dressed in the traditional Charedi clothing worn only post Bar Mitzvah (above the age of 13).

There are serious questions which must be asked, not only about the lack of action to shut down this illegal school for so many years (which would undoubtedly have been responsible for the deaths of these children were they less fortunate), but also why Hackney Council originally made a fictitious claim about the alleged school to which these boys belong?

This is why the work of the BHA is all the more critical in continuing to apply the pressure and hold authorities to account so that the well-being and rights of the children trapped in these schools, as I once was, can be protected.